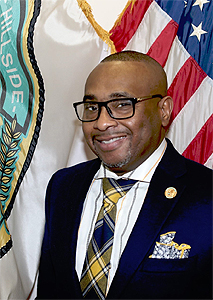 Councilman Craig Epps is a public servant as a citizen and professional. The At-Large Councilman serves Hillside with a focus on mentoring youth.

Councilman Epps has been on the Council since 2018, immediately showing his leadership and desire to be a mentor for youth. He currently serves as the Chair of the Personnel Committee and is Council Liaison to the Recreation Advisory Council and Alternate Board Member to the Joint Meeting of Essex and Union Counties.

A police officer for more than two decades for the city of East Orange, Councilman Epps is the President of the East Orange Fraternal Order of Police. He graduated from Rutgers University with a degree in Political Science. He is also a member of Phi Beta Sigma Fraternity Inc.

In a profile with Tap into Hillside, Councilman Epps explained his philosophy, stating he believes, "It's important for the next generation to work towards their goals by working hard to achieve what they want. In order for the future generation to be prepared and successful, the responsibility is on the adults to help teach and lead and mentor the children, along with mentoring and educating the parents to effectively communicate with our kids."

Councilman Epps is married to Hawaiian Thompson-Epps, and they have two children. He is a homeowner on Stanley Terrace and he is a Trustee of St. Matthew A.M.E. Church.