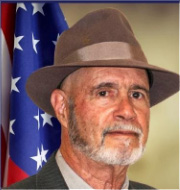 Councilman Gerald Pateesh Freedman's dedication to Hillside is exemplified by his long-standing service to the community. He has served on the Council for 21 years and is currently serving as Council President and the representative for Hillside's 4th Ward.

During his tenure, Freedman has been appointed to many committees. He is currently a member of the Finance Committee and serves as an alternate member of the Recreation Advisory Council.

Professionally, Councilman Freedman is a Professor and Supervisor of Physical Education at Essex County College where he has worked for 51 years. He is a former boxer, boxing trainer, and referee.

Councilman Freedman is a proud father and grandfather and is a Robert Street homeowner in Hillside's Fourth Ward.